Mix colors and fabrics to show your creative genius with McCall’s Palmer/Pletsch pattern M7842. Mix solid colors with prints. Mix quality quilting cottons from entire collections designed to go together. For a softer drape, use woven rayon fabrics in both solids and prints. 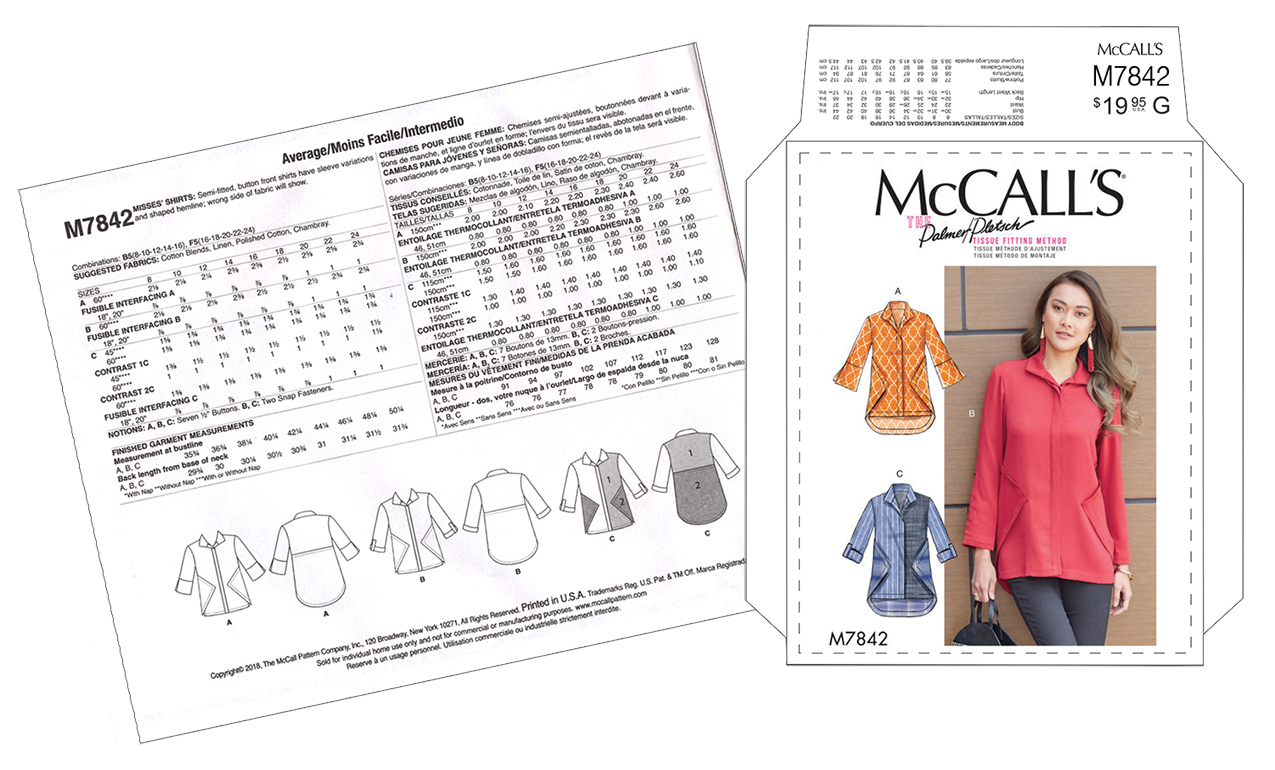 I love this shirt. I wanted a challenge so I mixed and matched some lovely woven Italian cottons from @josephinesdrygoods in Portland, Oregon. Fortunately, I bought extra of each. At first I thought I wanted the upper back to be the check and the lower back the dark pinstripe. Bad idea! It was not flattering—too much contrast widened my body. I played until I liked where all the fabrics ended up.

The right front and lower back are the same fabric so the lapping there is not as obvious as it is on the left side. 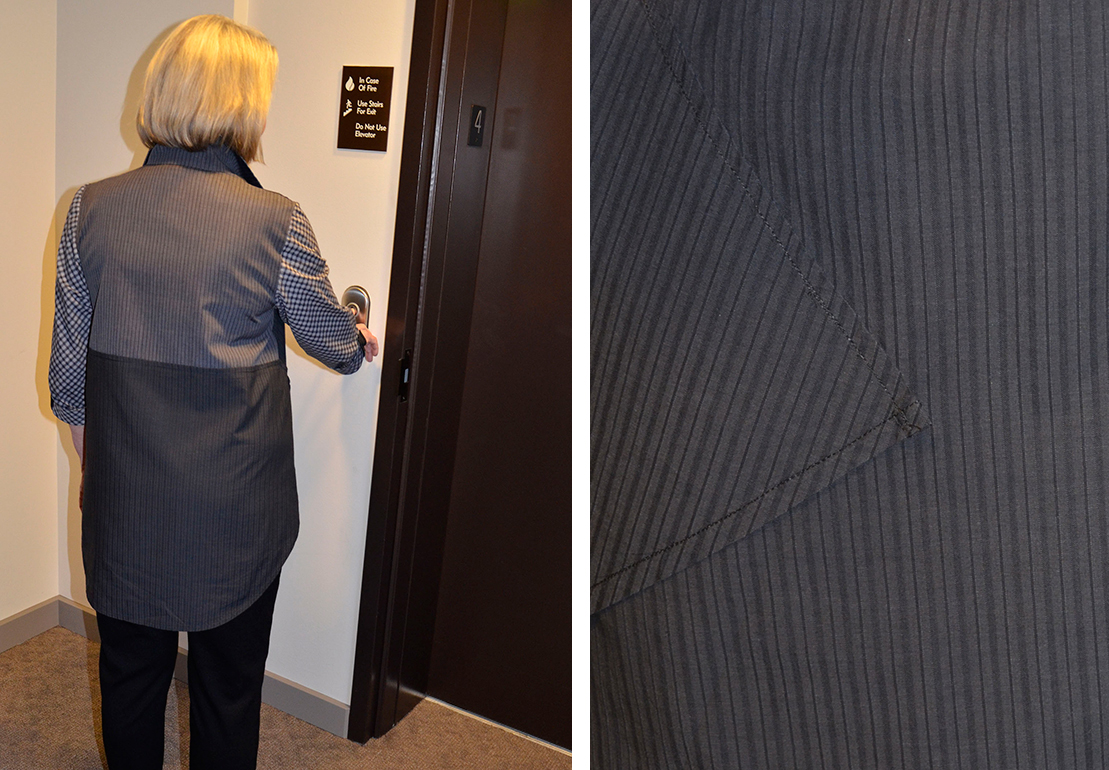 On the right you see how the stripes line up when the front fabric wraps to the back.

The pattern calls for the lower back to be self-lined to the edge, but I didn’t have enough fabric for a double layer. So I turned under the raw edges and topstitched.

I first serged using a differential-feed gathering stitch around the curves. You could also stitch a row of machine basting on the curves and pull on the bobbin thread to gather while pressing up the hem. I pressed 1/4” then 3/8” and topstitched.

I used Steam-A-Seam double-stick fusible web to make it easier. After pressing up the first layer, I stuck Steam-A-Seam in place and pressed to hold. I peeled off the protective paper and turned it up again, sticking the hem in place. Then I pressed enough to melt the fusible web so it would hold the hem while I topstitched.

Cutting the checks on the bias minimized matching, but when sewing next to the stripe, I needed to be careful to stay parallel to the lines. For sewing the bias band to the shirt front, I had to resort to slip-basting to prevent slippage. I folded the seams under on the shirt front and matched the seamline to the band seamline. Then I basted in the fold along a stripe on the shirt front and in the seamline on the band using red thread. With the slippage controlled, I removed the pins and, on the inside, sewed on top of the basting thread on the seamlines. 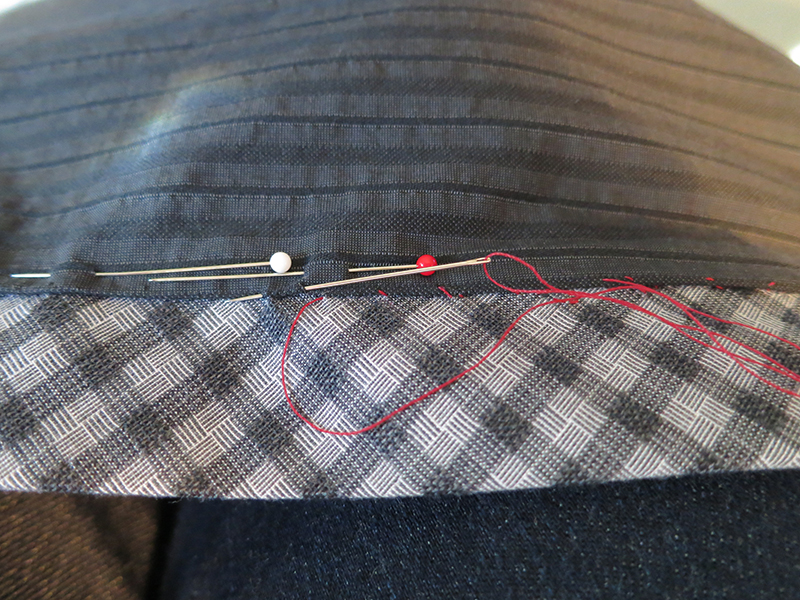 When I tried on the tissue, it was tight across the bust and the upper chest, so I did the “Y” full bust adjustment shown on page 2 of the guidesheet. Instead of cutting on line 2 and adding a bust dart, I stopped here, because I needed more hip width. Since the lower back does not have a side seam, I thought this would give me the extra I needed. Since I needed most of the width for my tummy, this seemed logical. The scary part was that I wouldn’t know until I got to lapping the back over the front and pinning in place. I was pleased when I tried it on. It fit perfectly. 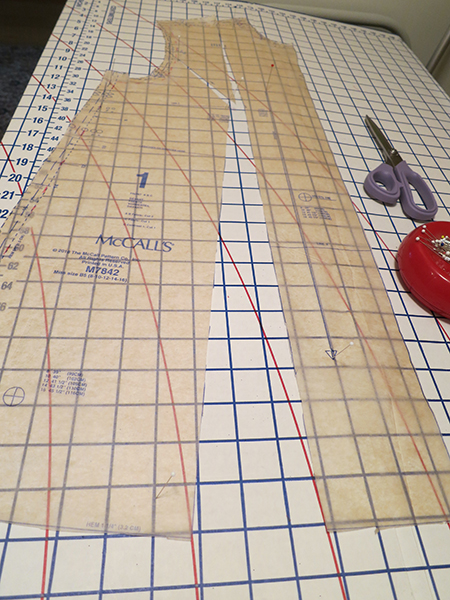 I filled in the open spaces with Perfect Pattern Paper. If I were fuller busted, I might have added length at the lower front edge, tapering to nothing at the side seam. But I am a small C cup. It hung evenly on my body when I fabric-fitted. 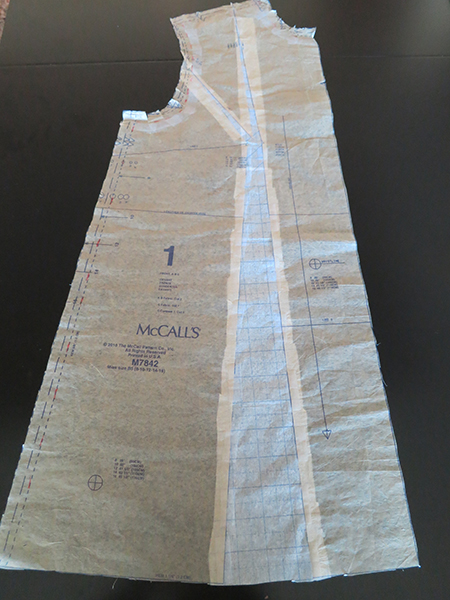 NOTE: For an easier triple-fold hidden placket, follow the instructions from our out-of-print Palmer/Pletsch book Sensational Silk. I’ve scanned those pages and posted them at the end of this blog. You will need to add tissue to the front edge.

Follow the order in the guidesheet because it is very different from a regular shirt. Don’t sew the shoulder seams until the back is completed and sewn to the front. It is easier if you have a flat surface. All of the hems are finished first. 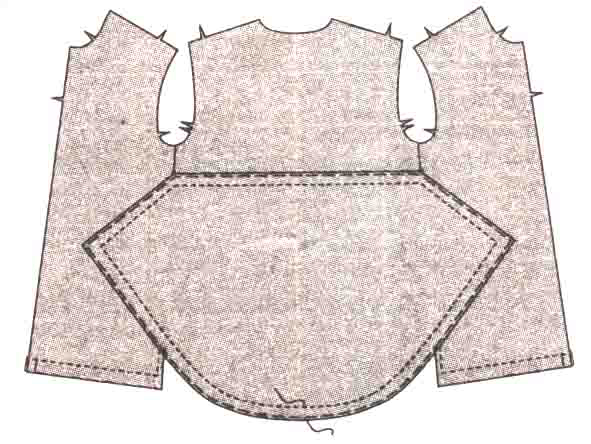 Also, don’t attach the collar or staystitch the neckline until you sew the buttonholes in the fly of the hidden placket.

I fused Palmer/Pletsch PerfectSew Sheer to the bias bands. I needed the straight grain interfacing to stabilize the bias on all of the band pieces. Be sure to cut four bands (piece #5) and two of the shorter bands for the placket fly (piece #4). I also fused to the upper collar.

I made notes on the guidesheet as I sewed. You may find these tips helpful for your own sewing, especially if you decide to use bias as I did. 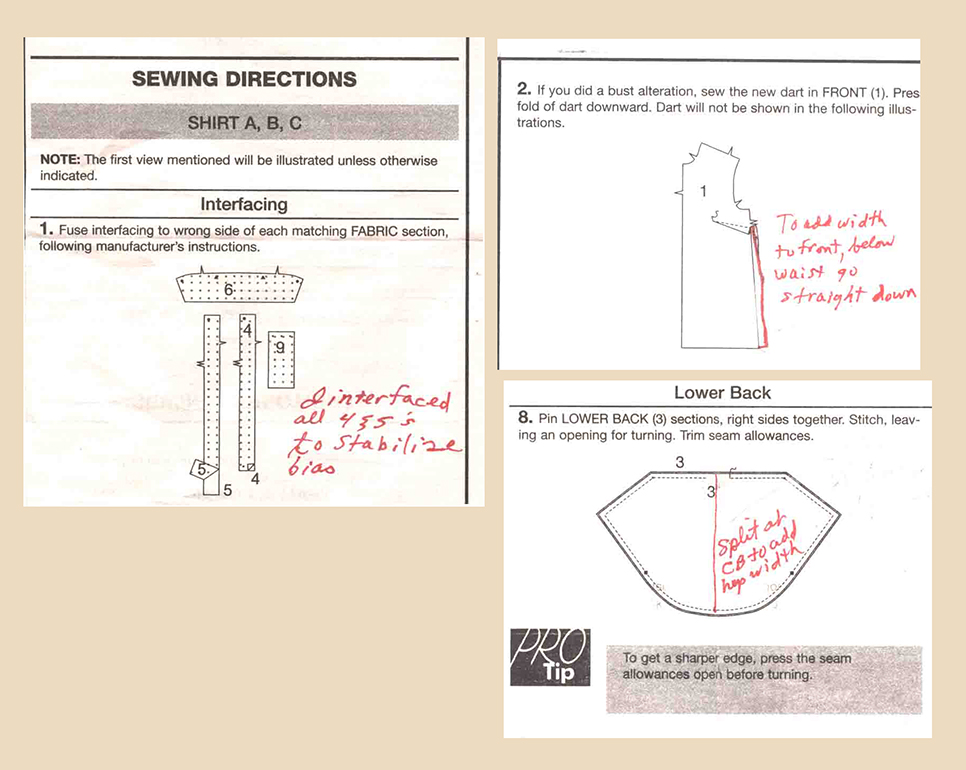 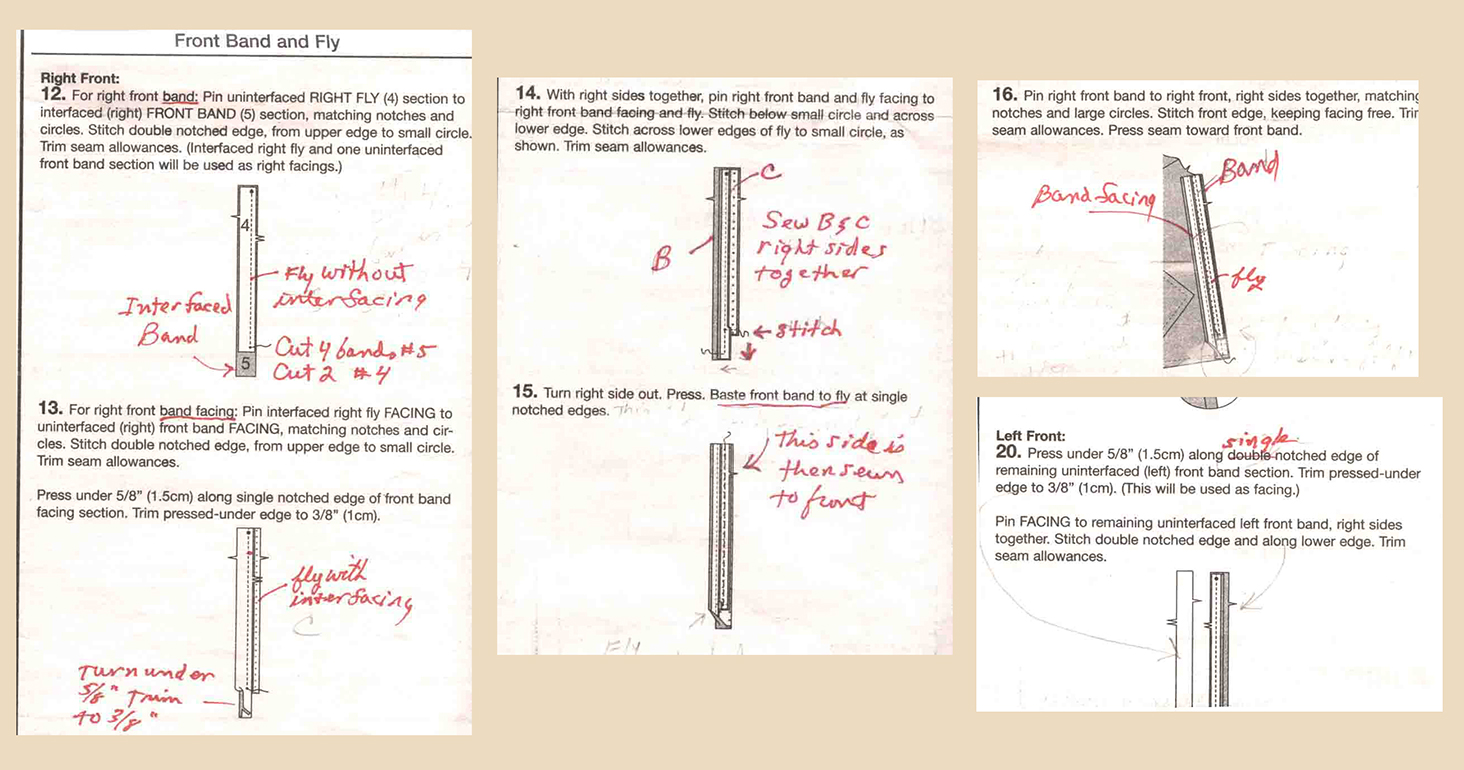 Since we sold our house last year and downsized to a condo (with a great view), I don’t have a permanent sewing room. I am having a blast sewing where I want to or can! We’ve now moved just across the street to a new condo, but here are a couple of shots of where I’ve been sewing this past year: 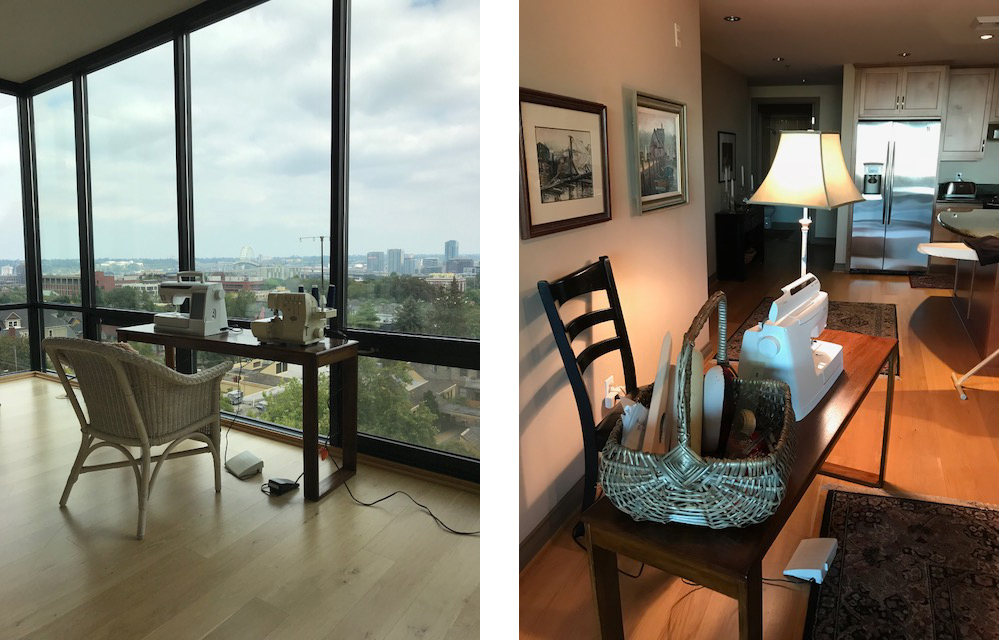 I sometimes sewed with a view out over downtown Portland and beyond to Mt. Hood. Other times I chose the dining room. 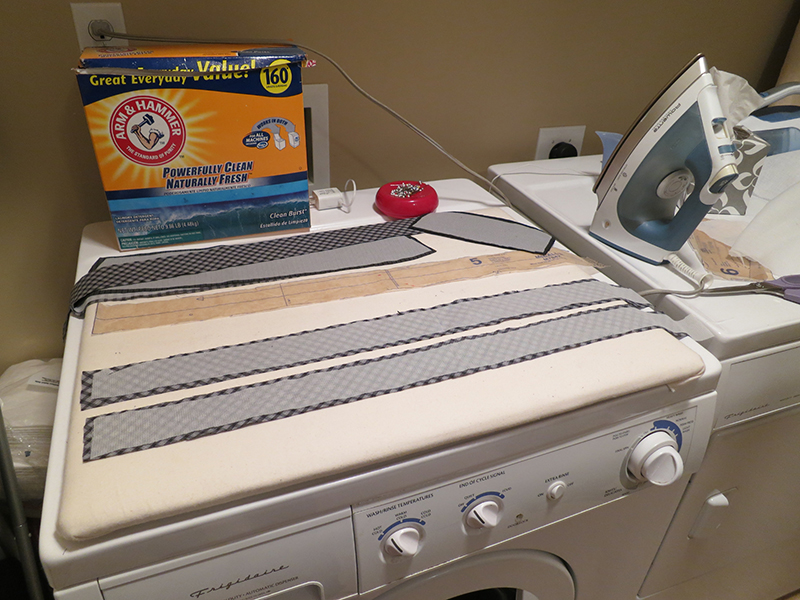 I now fuse interfacings on my small padded pressing board on top of the washer. It works great.

Earlier I mentioned the fold-over technique for a cut-on hidden button placket, which is easier to do. Here are instructions from the out-of-print Palmer/Pletsch book Sensational Silk. 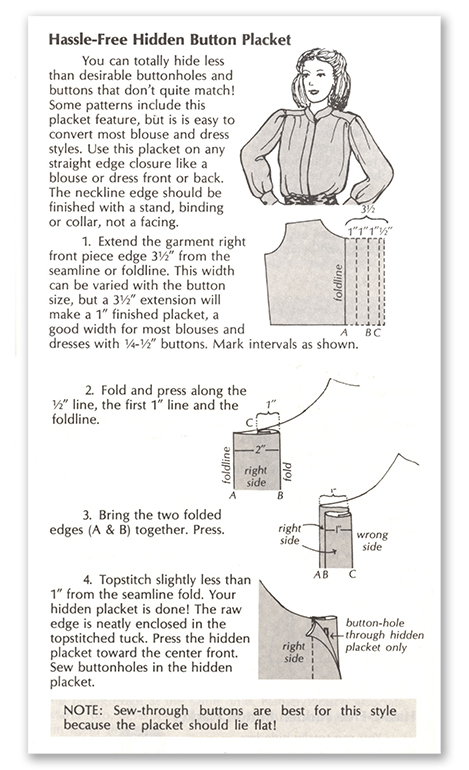 For the side on which you sew the buttons, you can simply do a fold-over self-interfaced facing. If your fabric is the same on the right and wrong sides, you can fold to the outside and topstitch for a band look. 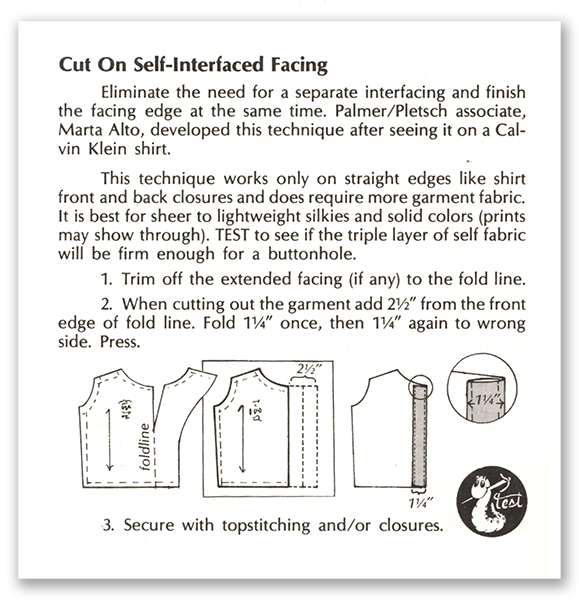 Would you like more guidance on sewing a blouse?

In our 2-hour Learn to Sew a Shirt or Blouse DVD, Marta Alto sews a shirt in two hours…which probably won’t happen with the project you just read about above. 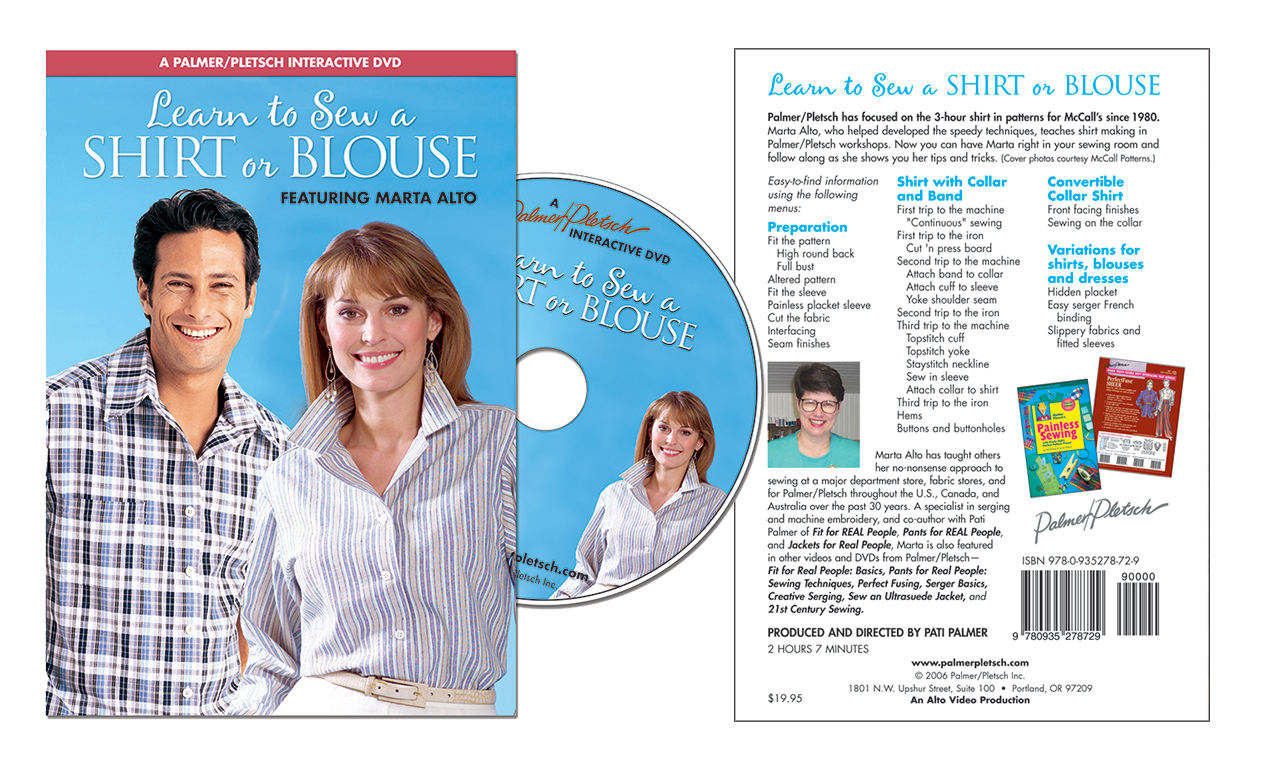 For more guidance, be sure to read the guide sheets that come with our patterns. We include tips from our books, such as these from Mother Pletsch’s Painless Sewing, which is a classic little book for learning to sew, or as a refresher. “Mother Pletsch’s Truths” and “Pretty Pati’s Pointers” are classics everyone needs to know! 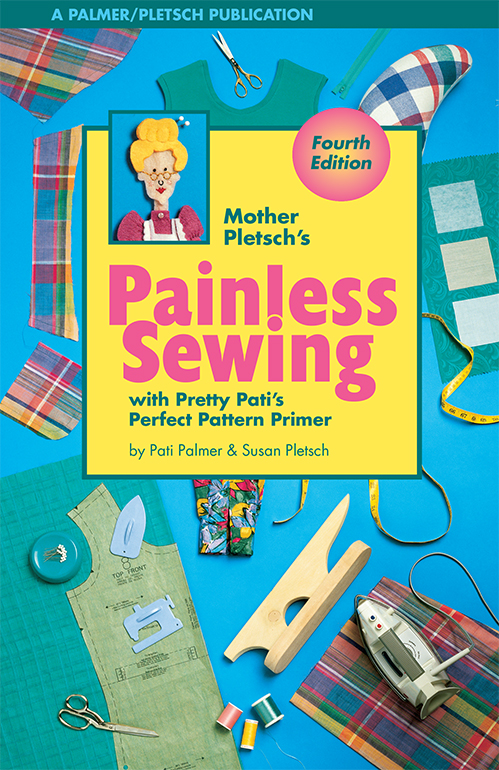 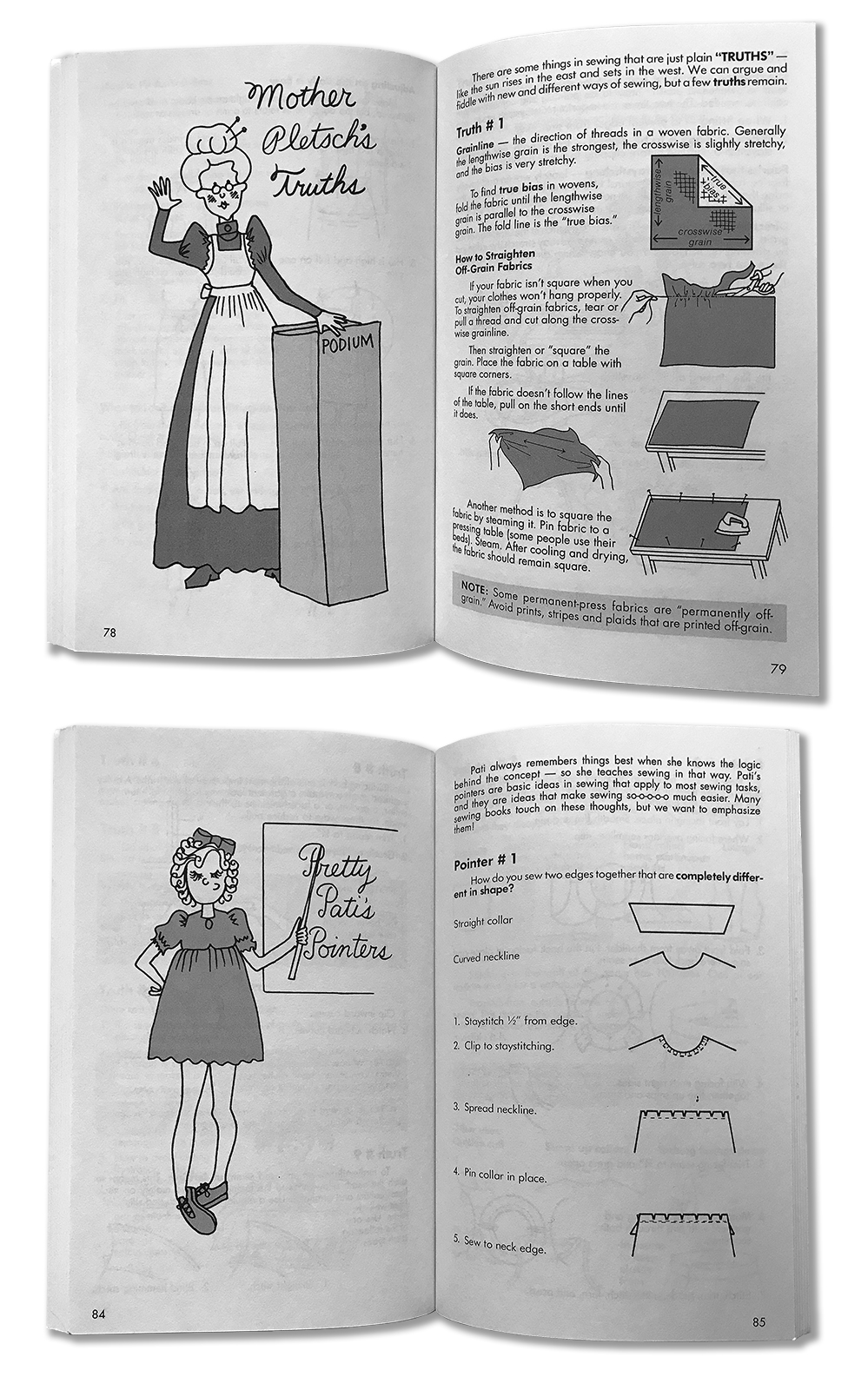 Sewing Beyond the Pattern Envelope—McCall's 6750 Blouse

Taking a Favorite Pattern to a New Season

What do you think? Cancel reply